Los Angeles: You Art What You Eat, an Interactive Food Art Experience

On April 19, 2017, Chrissy and I attended an event themed You Art What You Eat (#YouArtWhatYouEat), which was an interactive food art event hosted by Avital Tours & Events, in partnership with Greenbar Distillery. The event celebrates the intersection of food and art in the Los Angeles dining scene, and they were not kidding!

Our venue host, Greenbar Distillery, is located in the industrial part of downtown LA, off Santa Fe and 8th Street, across the freeway from the Amtrak 8th Street Train Yard. There is a tiny parking lot across from the building, but otherwise, its street parking in this cul-de-sac. Behind the industrial backdrop, this distillery makes their own whiskey, rum, tequila, gin and vodka. They also make various bitters and liquors, and offer tastings and tours.

After we checked in, we were handed a program and told to head up and check out the food and drink station. 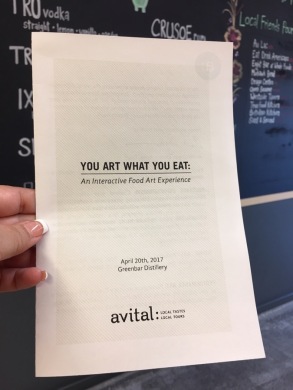 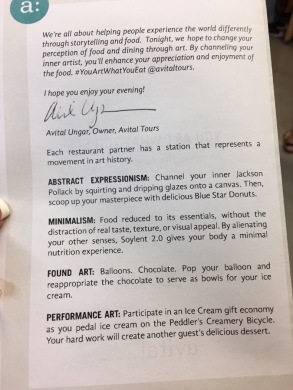 We were first greeted by the Found Art station, which was a wall of balloons dipped in chocolate.  The instructions was to take a pin, and pop a balloon to create a chocolate bowl, to be used in the ice cream station downstairs. 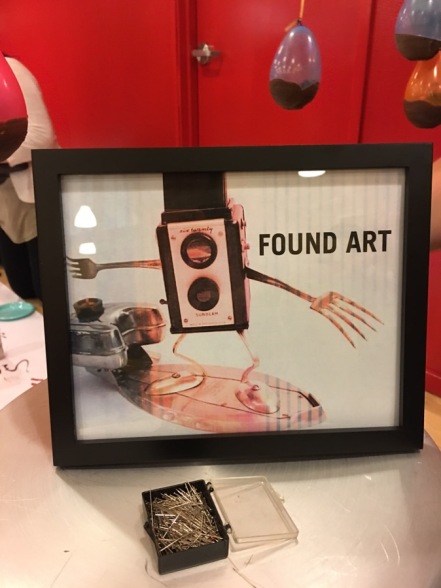 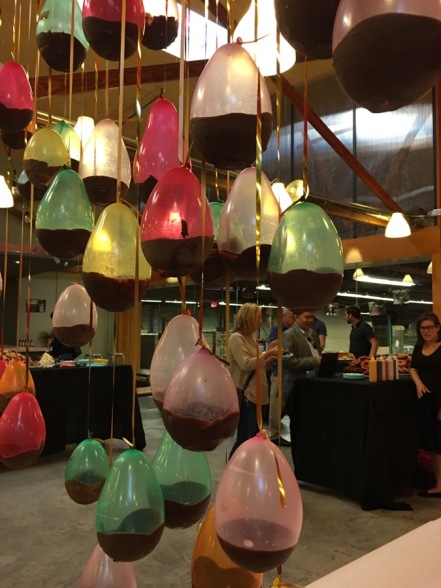 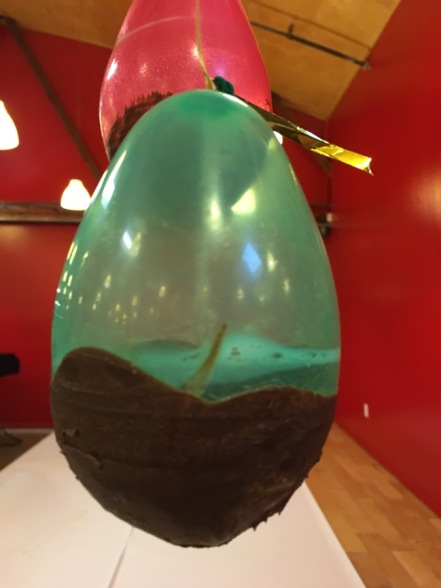 The food event was primarily held upstairs in what you could consider a loft, a small open area overlooking their distillery below.  There were various different food stations, all with the concept that food can be art, and they encouraged you to play with your food. Chrissy enjoyed the free spirited feeling where anything goes and that everything was up to your own impression. 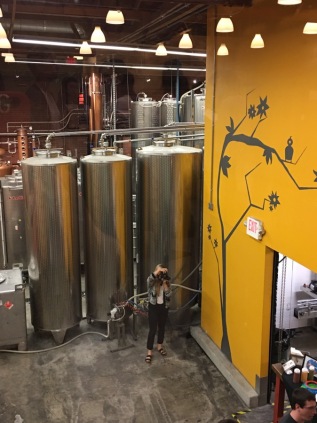 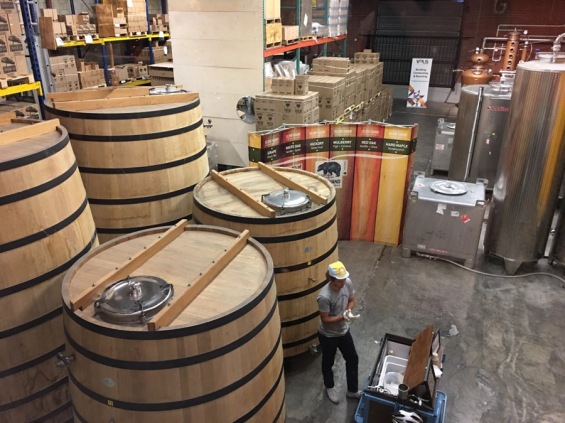 Past the wall of chocolate balloons,  was the most interactive station: the Abstract Expressionism. Inspired by Jackson Pollack, you pick a donut (generously provided by Blue Star Donuts), and then “paint” your donut using various glazes such as horchata sauce to lemon poppy seed to plain chocolate, with your donut lying on top of a white drop cloth.

Chrissy chose the buttermilk donut and I went with the brioche donut.  We were giggling as we freeing squirted all the different colored glazes on our donut canvas. As the night progressed, Chrissy noticed the large drop cloth canvas started becoming more colorful, just like a Jackson Pollack paining. Such an easy concept that brought together both art and food.

Adjacent to the Abstract Expressionism was the Photography station by Lokal Travel, featuring work from their last Colombian private tour. Their 13 days tours are full cultural immersion experiences, where you are taken off the beaten path.  For this event, they offered a Colombian croquettes inspired from their last tour.  It was a mixture of potato, beef and onion with cilantro tomato salsa to accompany it.  Their next tour will be in August to Guatemala, where you’ll be staying in remote Mayan village. 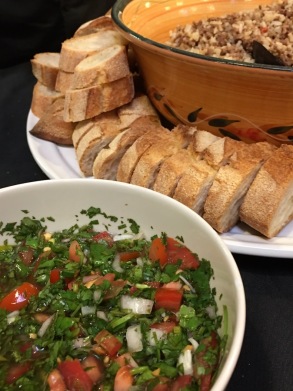 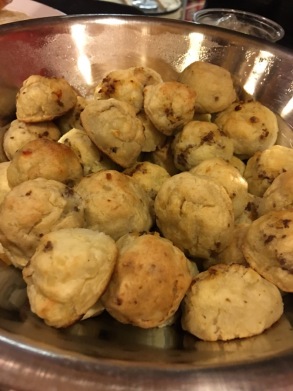 We continued our food journey with the Neoplasticism station (a style of abstract painting developed by Piet Mondrian, using only vertical and horizontal lines and rectangular shapes in black, white, gray, and primary colors) hosted by Lodge Bread Co in conjunction with the Tehachapi Grain Project. Lodge Bread started off as a backyard experiment by 2 young chefs killing time with sourdough.  In 2015 they created a hit, and in 2017 they opened their LA bakery and restaurant.  The James Beard Foundation recognized Lodge Bread’s bakers/owners Alexander Phaneuf and Or Amsalam as 2017 semifinalists in the category of Outstanding Baker. 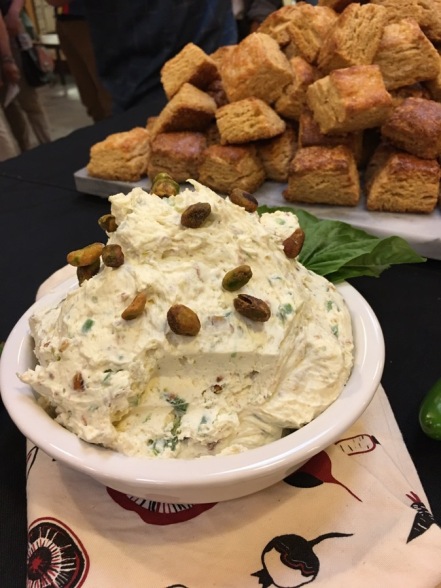 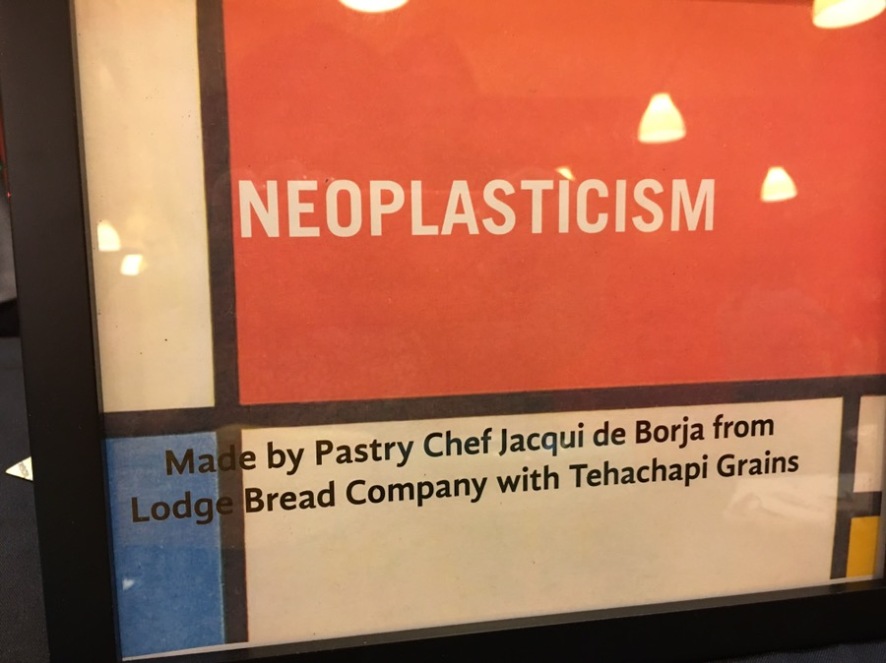 The station had buttermilk biscuits and three different spreads to accompany them. Jalapeño cream cheese, a miso ginger butter and a strawberry black pepper and basil spread. With the “anything goes” theme, they encourage us to mix the flavors to create our own taste. The miso ginger butter was something I never would have thought of. It was sweet, but with the ginger had a pop of tang. It blended wonderfully with the crisp buttermilk biscuit. In the strawberry spread I didn’t taste the black pepper, but the basil did shine through. Mixing the two spread provided and interesting taste.

When we first checked in, we were told to go directly to the bar to get a drink featuring Greenbar’s liquors. We didn’t listen, and by the time we reached that area, the bar was crowded so we had to wait.  Chrissy was able to make her way to the front of the bar and was offered three cocktail choices. She chose for us The Art Nouvea which was: a slow hand white whisky, fruit lab hibiscus liqueur, fresh lime juice and simple syrup. 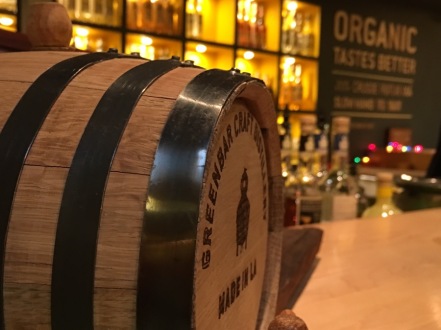 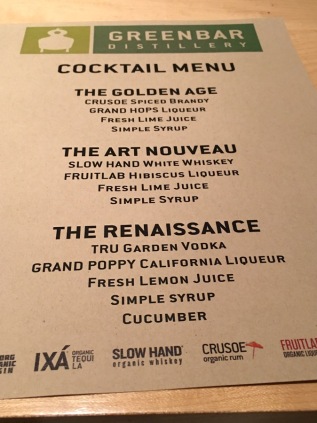 The purpose of this station was to make your cocktail into art.  So while you waited for your drink to be made,  you were encouraged to make a stencil to place over your drink and then sprinkle it with sunflower sugar glitter to create a colorful stencil art. Chrissy couldn’t really master the stencil, but instead, did a freehand colorful heart. We took the first sip and were surprised that the drink was very smooth and didn’t have the bitter taste of whiskey. As we waited for the drink to settle, it almost had a cider taste to it. It was very tasty, and we could see how it could become very addicting. 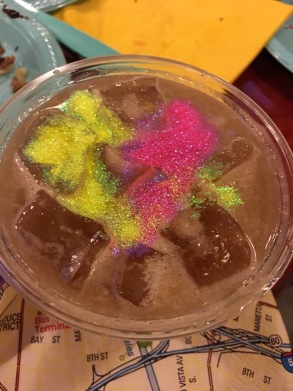 We were done with the upstairs portion of the event, so we made our way downstairs to the distillery area where Chicas Tacos and Peddler’s Creamery was located.

Mexican restaurant Chicas Tacos was offering “wearable art” where you fill tiny vials with salsas, and wear it as a necklace. In addition to the art, the restaurant offered samples of their salsas (habanero, tomatillo and paquin) with tortilla chips.

It was getting late, so the final stop was at Performance Art which hosted by Peddler’s Creamery. Like the other vendors, this store was also located in Downtown Los Angeles. What makes them unique is their ice cream and sorbets are all made by bicycle power.

Three flavor were available to try: Mexican Chocolate (made with dairy)  and vegan option: the Lemon Cookie and Strawberry Basil Sorbet which were made with coconut milk.  The Mexican Chocolate had a slight kick to it, as it must have been lightly dusted with chili. The vegan ice cream was creamy and you can taste the coconut. A great alternative to dairy. 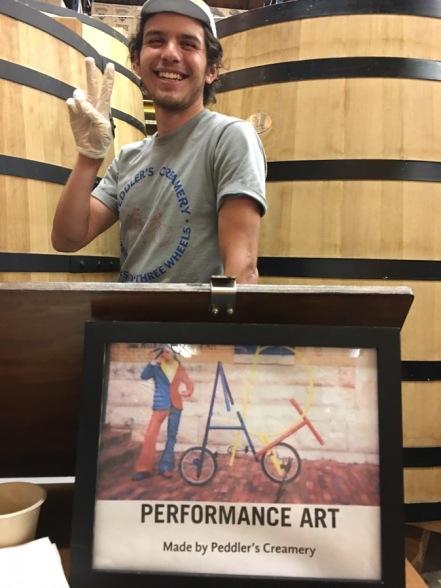 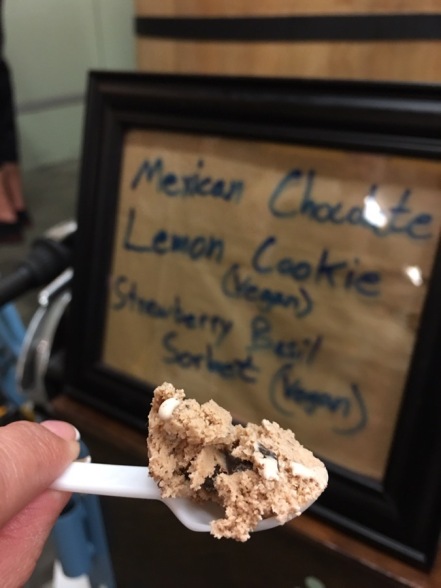 The event was very enjoyable, and a great way to be introduced to local vendors based in Los Angeles. None of the vendors pushed their products but did provide information of their business if you asked them.  This event was very interactive, and I hope Avital Tours will host another one like this.