Another trip to Las Vegas.. where to eat this time?  Stephen suggested going to our “go to” Italian Deli, but I was craving grits.  There is a restaurant in North Las Vegas called Grits Cafe but it’s a tiny place that gets busy on weekends. I didn’t really […]

It’s Halloween Time at the Disneyland Resort.  Stephen and I wanted to try some of the seasonal goodies that was being offered.  On the Disneyland website, they had the breakdown of the goodies, and the locations.  We started off at Disney California Adventure (DCA) for the special Oktoberfest […]

I needed a restaurant that was near the La Mirada AMC 7, and this Peruvian place popped up. It’s located off Imperial and Santa Gertrudes, next door to a Mike’s burger, across the street from a Grocery Outlet strip mall. Upon walking in, the place is dark. We […]

I’ve had Cali Tacos bookmarked for the longest time, but hesitate on going because the one on Chapman had the reputation of having poor parking and crowded.  Then, this location at 1631 17th Street opened up, and I took advantage that not too many people knew it was […]

Mrs. Bean (or @mrsbeanjianbing on social media) is a Chinese noodle place, located at the Main Place mall in Santa Ana.  Karen and I was supposed to meet up at Boudins, but noticed this new Chinese noodle place was having their soft opening. The 20% off enticed us […]

National Fried Chicken day was Friday, July 6th but Disneyland Resort took it a step further and had the Fried Chicken Festival for the entire weekend.  There was no additional perk or discount, but if you purchased a fried chicken dinner, you would get a commemorative button at […]

In January 2018, Disney California Adventured closed the Paradise Pier section of the park to give it a rebranding called Pixar Pier, where everything is themed with characters from the Pixar movies.  Last weekend, the pier reopened, and in the rebranding was the Lamplight Lounge, formerly the Cove […]

I was going to the Brea Mall and wasn’t really craving the food court for dinner. I went on the mall’s website, and saw that they had a Shabu restaurant.  Nestled between the Macy’s Mens and Home Store and the Red Robin restaurant is HaiDiLao Fusion Shabu restaurant. In […]

The Pizza Press in Fullerton is another “build your own” pizza place, but this place also serves craft beer.. the bonus in coming here versus Pieology located around the corner. It’s a little hard to find, as there’s no real big sign off the street. They’re located on […]

I was in South County and hankering for some Tallarin Saltado… not the green pesto version, just the “normal” one with chicken or beef. This place popped up on Yelp with decent reviews. It wasn’t easy to find because it’s tucked in a non descript strip mall, behind a Walgreens. The […]

MFK means “Modern Filipino Kitchen” and Aysee is the owner’s grandmother. I have driven by this location multiple times, and never knew it because it really is hidden. It’s near the corner of Magnolia and La Palma, sandwiched behind a convenience store and an Ethiopian restaurant. If you […]

On Tuesday night I was invited back to SAJJ Mediterranean in Rancho Santa Margarita to cover the media event for their new chocolate hummus. Unfortunately I was not able to attend, so my partner-in-crime, Chrissy went for me.  Here’s her recap: Originally a food truck, SAJJ Mediterranean currently operates two […] 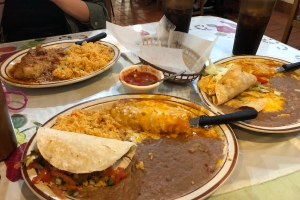 My BFF Rebecca took me here to celebrate my belated birthday, and her daughter’s 15th.  El Farolito is located off the 57 freeway /Chapman off quiet Bradford Street.  There’s street parking and a private lot parking. Let’s start off with the food. Delicious! I couldn’t stop eating it. A+ for […]

Fullerton has a lot of KFC’s… that’s Korean Fried Chicken restaurants. Korean fried chicken differs from typical American fried chicken because it is fried twice and the skin is therefore crunchier and less greasy. The chicken is usually seasoned with spices, sugar, and salt, prior to and after […] 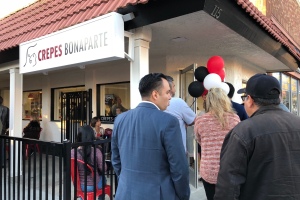 On Thursday, March 1st, Crepes Bonaparte had their grand opening celebration.  From 5:00 to 9:00 pm, they were giving away a free Nutella crepe to anyone who stopped by.  Free crepe! Of course I’ll stop by… as did a whole bunch of other fans of this food truck. […] 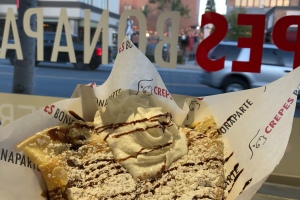 Crepes Bonaparte (@crepesbonaparte) is a food truck that has been rolling throughout Los Angeles and Orange County since 2008, was on season one of the tv show, “The Great Food Truck Race” as well as on national and local tv such as KTLA.  On March 1st, they will be opening their […]

There’s a new Mediterranean restaurant called SAJJ in Ranch Santa Margarita (or RSM to the locals). They call it line style ordering… but you will relate more if I call it Chipotle or Subway style ordering. You pick your base, whether its a bowl, wrap or pita. Then you […]