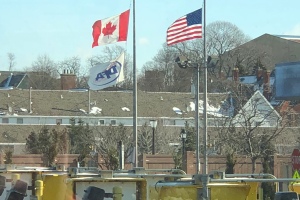 We traveled by Plane, then Train.. and now automobile.  This part of the trip is not part of the Road Crew.  Twenty five fans traveled independently with me by bus to Buffalo to catch the 7:00 game against the Sabres.  I hired a 56 passenger bus by Coach Canada, and our […] 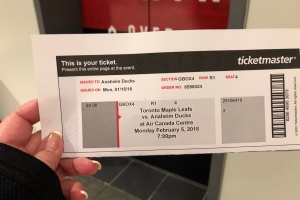 Getting tickets at the Air Canada Centre is difficult. Getting tickets for almost 100 fans should be near impossible, but somehow the Ducks got us all tickets. However, they were in the gondolas located high above the arena, and we had to take an additional elevator to get […] 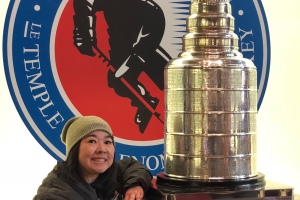 The reason the Ducks chose Toronto for this year’s Road Crew city was 2 former players: Teemu Selanne and Paul Kariya were inducted into the Hockey Hall of Fame.  It made perfect sense to visit this city, and to check out the Hall of Fame’s newest inductees. After the morning skate, […] 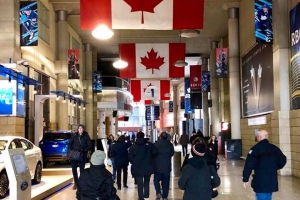 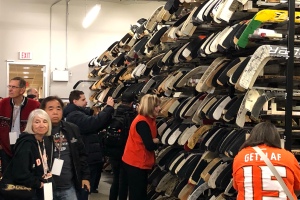 We only have 1 day in this city and the Ducks packed a full day for us, starting at 7:30 am.  When we checked in yesterday, in our packet was a $35 gift card for Tim Horton’s, or Timmy’s as its more fondly named, where we would use that […] 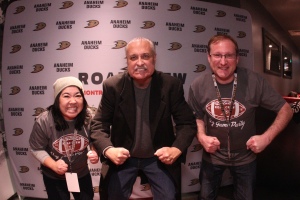 It’s is rare when our Road Crew trip falls on a Super Bowl Sunday.  The last time was in Pittsburgh, and the Ducks hosted a party at a local bar, provided drinks, heavy appetizers, and prizes. This trip was no different.  The Ducks (and radio guy Steve Carroll) […] 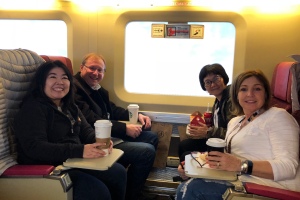 Our journey continues by way of a train from Montreal to Toronto. Our departure time was 8:55, but we were dropped off early in case people had to check in luggage or wanted to get some breakfast.  Since we had carry on, Stephen and I went to Starbucks […] 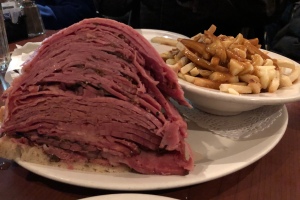 After watching our Ducks lose 2-5, I started scouting out for dinner plans. Most of the group members were starving, since they didn’t eat at the game.  So I found Reuben’s, another deli type place that could accommodate us at 6:00. The place was packed, and we were […] 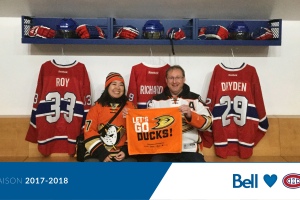 The hockey game was early at 1:00 pm.  We found out during the Super Bowl weekend, the Montreal Canadiens schedule the game early, and make it family friendly.  From the national anthem singer to the starting lineup announcer to the guest DJ, they were all kids. There were plenty of free, interactive things […] 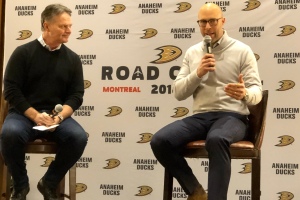 As mentioned earlier, the Ducks Road Crew trips are always a first class experience.  This trip was no different.  In most of the trips, we get the opportunity to have a meet and greet with players, Ducks staff, or media personality.  On our itinerary, it was notated that […] 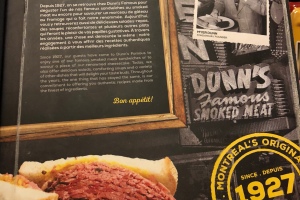 After checking in with the Road Crew, it was time to grab some dinner.  Thanks again to Yelp, I found Dunn’s Famous, a deli that was about the same distance as Pub McLean’s.  This place was established in 1927 and is open 24/7. We were lucky that a […] 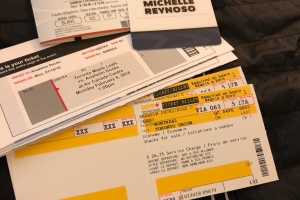 The Ducks Road Crew is the official traveling group of the Anaheim Ducks hockey club.  They organize a trip for the fans, with special perks and merchandise that is exclusive to the trip.  The cost for this trip only includes the land portion, so fans must find their […] 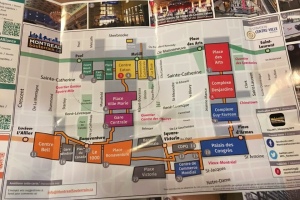 Good morning! It’s the official first day of the Ducks Road Crew trip. We started off our morning by taking a walk in very brisk, chilly weather to a café I found on yelp: Universel.  The staff was not the friendliest, and the food was just ok.  At least […] 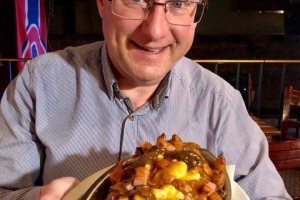 Pub McLean’s is located about 2 blocks our downtown Montreal hotel. While in flight from Los Angeles, I messaged the owner via Yelp and asked if we could make a reservations to watch the Ducks vs. Senators game at 7:00.  No problem. When we arrived, the assistant manager […] 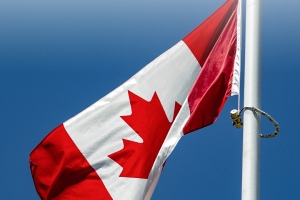 This year’s Ducks Road Crew trip was Montreal and Toronto, and then I am breaking off on my own with 25 other fans to Buffalo.  About 90 Ducks fans will be attending this year’s trip, the biggest one for North America (with London and Finland/Sweden being bigger).  Karen, […] 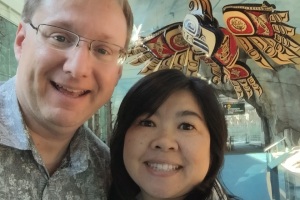 Sept 2014: Cruising from Vancouver to LA

On September 21, Stephen and I flew up to Vancouver to take a Princess Cruise… not to Alaska, but back to Los Angeles.  It was a 3 day repositioning cruise, and no stops  It was 3 days cruising the western coast of the United States, where you […] 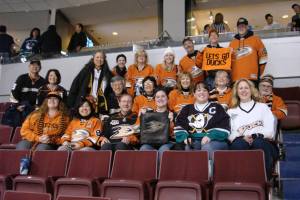 By callmemochelle on March 30, 2014
Follow You can Call Me Mochelle on WordPress.com