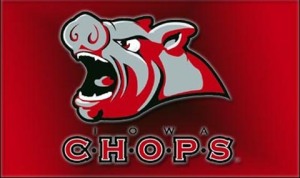 Jul 9, 2008, 5:48 PM EDT
The Anaheim Ducks’ new AHL affiliate for the 2008-09 season has officially been renamed the “Iowa Chops”. With announcements regarding new, lower ticket prices, a new president, and a new affiliate all occurring within weeks of each other this summer, representatives of Iowa’s AHL hockey team decided the time was right to unveil the team’s new name, logo and colors.

“We really feel this name perfectly represents our vision of the new team,” says team owner Kirby Schlegel. “It illustrates Iowa’s agricultural heritage while also playing into the definition of ‘chops’, having nerve, resilience and staying power. The word ‘chops’ can mean continually defeating someone, and that is the reputation we expect Iowa’s new team to gain in the league.”

After numerous conversations with Iowans to get a feel for the culture and the passion within the state, the Iowa Chops was ultimately chosen by team executives, as it represented the great state of Iowa.

“We wanted a name that would catch people’s attention and spark discussion, not just in Iowa but nationally as well,” says Steve Nitzel, Iowa Chops President. “There is no doubt the name is unique. We’re confident that the team will continue to gain respect in this community and in the league for years to come.”

The new logo depicts a vicious boar’s head in the team colors of crimson, grey and black, and was designed to depict the tougher style of hockey coming to Iowa. Showcasing the team’s proud Iowa roots, the secondary logo (located on the shoulders of players’ jerseys) is an outline of the state of Iowa with a giant letter “I” in the center.

An announcement on who will coach the Iowa Chops is due later this summer. The team’s home opening game is scheduled for Friday, October 10, 2008. To buy tickets for this season, call 515-564-8700 for more information.