Last year I took Stephen to Mastro’s Ocean Club in Corona Del Mar for his birthday.  We really enjoyed the meal, so for my birthday this year, I chose the Mastro’s in Costa Mesa.   We arrived at 7:00 pm on a Saturday night. It’s located just down the street from South Coast Plaza, ironic next door to a TGI Friday.  Apparently, it’s valet parking only, which luckily it’s only $6.00.

Since you’re coming to a high-end steakhouse, expect to be treated like you’re dining in a high-end restaurant.  As I was walking toward the door, I spied a shadow on the other side, automatically opening the door for me, and a lovely hostess greeted me to the restaurant.  My table wasn’t quite ready, so the check in hostess asked if we wanted to wait in the bar.  The bar was packed, so I told the hostess we decided to just wait by the hostess center and our table was ready within minutes.

She seated us in their “patio” area, which probably is the patio, but it was enclosed like a tent, and with drapes and dimmed light.  I actually preferred the patio, as it was better lit, and also more quiet than the main dining area, that had music blasting as lout as the bar area. Our server, Tom, greeted us, and took our drink order.  Stephen chose the sazerac ($18) as his cocktail, while I just stuck with water.  What seemed like an eternity, our drink arrived as well as a bread basket.

Tom finally came back to discuss the menu.  Naturally he tried to up-sell us with the Wagyu beef, or the side of prawns (3 for $80), or the famous (but outrageously expensive) tower of seafood.  We declined.  Stephen and I chose to split the 33 ounce “Chef Cut” rib eye ($66).  It wasn’t the price, but the mere fact anyone could eat 33 ounces of meat!  Even cut in half, we would be eating 16 ounces, which is still ginormous.  We splurged and ordered the lobster mashed potatoes ($35) and the Brussels sprouts ($14).  We debated between the sauteed mushrooms or the wild mushrooms, and Tom suggested the wild ones… of course he did, at $19, which is $5 more than the other choice.

Our steaks came out on very hot sizzling platters. The kitchen has our rib eye already cut in 1/2 portions on each plate, which was a nice touch.  Tom came out next with the lobster mashed potatoes, which I was able to quickly snap a photo of before he mixed that sinful concoction of a lake of butter, potatoes and lobster. Next came the Brussels sprouts and the wild mushroom sizzling on hot skillets.  We asked if they could put the sides in the middle of the table, and we’d serve ourselves (camera must eat first!).

Everything was delicious.  No calorie counting this evening (and I wouldn’t dare!) as we savored every bite.  Even though we shared the meal, we still had leftovers.  I was so full, but had just enough room to share the complimentary birthday cake with house-made whipped cream and a cup of coffee ($5.00). 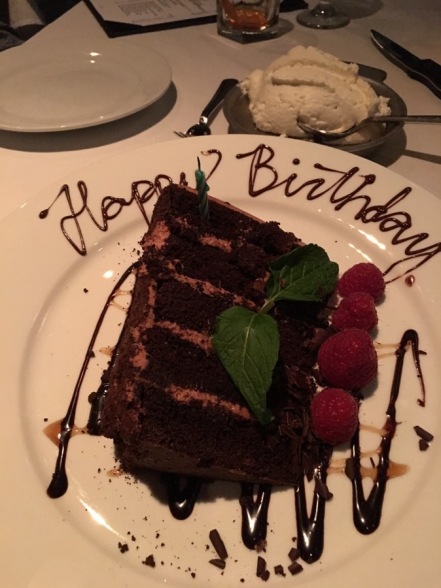 Dinner for 2 came to just over $174 with tax.  Since I am an avid OpenTable user, I cashed in my points and used $100 toward the meal, making it less than $75 before tip. This place exudes indulgence in every way you can think of.  Thumbs up to a lovely, but pricey birthday dinner. However, I thought our service from Tom could have been better.