I came across a great airfare to Orlando, and decided to go back to Walt Disney World. I had October 8th off from work (Columbus Day), and I already had admission paid with my annual pass.. how could I pass this up? I coherced Karen to go with me, and booked us the red eye on Delta Airlines.

We stayed at the Port Orleans Riverside resort, which was very nice, but the property was just too large for me.  I prefer the Port Orleans French Quarter, located next door.  But.. this property was less expensive with the Annual Passholder discount, so how could I complain?  Next time if I stay here, I’ll request building 14 or 27.

Our first stop was the Magic Kingdom, so we could get our Sorcerers of the Magic Kingdom game cards. This interactive game is free, and there’s a total of 60 cards you can collect to play this game.  There’s an additional 10 cards found in “booster” packs, but these packs are not free, and they are sold sporadically.  Lucky for us, we arrived on a day they did have the booster packs, and we found out they sold out minutes after we got ours.  Talk about lucky!

One event that I’ve always wanted to attend is the Epcot Food and Wine.  We lucked out that the festival just started, I could not have planned this trip any better!

After visiting Magic Kingdom, we made our way to Epcot to meet up with Anne and Cristy at the Festival Center, located next to the Universe of Energy show. Inside are food and wine demonstrations, samples, and a lounge hosted by Chase bank for their customers.

We worked our way around the World Showcase and sampled foods from most of the pavillions.  I’m only posting a few pictures, as the 4 of us ate a lot of food!

Epcot also has an interactive game where you can play a secret agent to help save the world. The game is free, and the agents provide you with an interactive cell phone (that’s only good at Epcot).  You follow the clues on the screen and each game takes about half hour.
Karen has not been to WDW in over five years, so we made our way to Hollywood Studios (formerly called MGM Studios) so she could experience the new Star Tours 2.0, and see their version of Fantasmic! 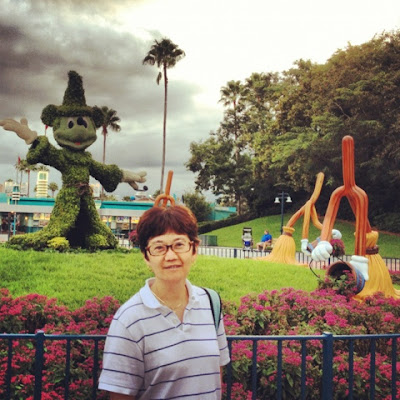 On our last day, we had tickets to the Mickey’s Not So Scary Halloween Party.  The Magic Kingdom closed early at 7 pm for this special event, which cost a separate admission.  The event was not cheap, and supposedly the lines for the rides were shorter because they limit the amount of attendance.  It did seem short (average wait was 10 minutes) but being it was already the slow season, most of the wait time was 10 minutes anyway.
In addition to shorter lines, they gave our candy to the “trick or treaters”,  provided various dance parties, and even had a spook-tacular parade (which we skipped).  Many people dressed up (some took the dressing up too seriously!) and it was a pretty fun event.  It did rain a little bit, but lucky for us, we ducked into “its a small world” and the rain disappeared by the time we came out.