I’ve been friends with Robert probably for over 10 years now. When he comes to California, we make it a point to meet for dinner, so it makes sense to do the same when I go to Munich. The last time we were in Munich, they took us to the iconic Hofbräuhaus. This visit he suggested Greek food. Greek? Really? In Germany? Well, why not!

The closest I’ve had with Greek food is Daphne’s Greek Cafe, a fast food chain restaurant, and the gyros you get at the mall or at street festivals. So we agreed to meet on a very rainy Tuesday night at Nefili, located in a residential area of Munich. Even with the GPS, I got plenty lost and what should’ve been a 20 minute drive took 45 minutes, thanks to the rain and confusing road. 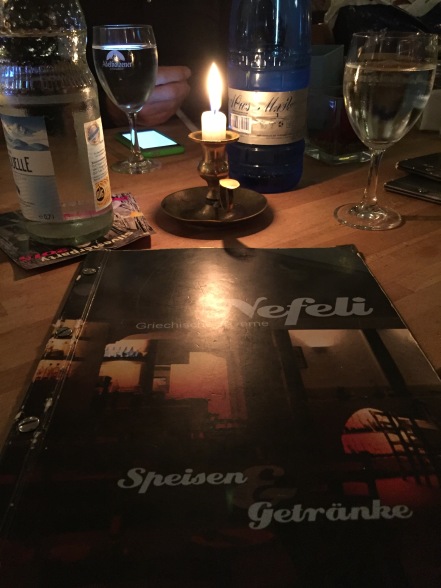 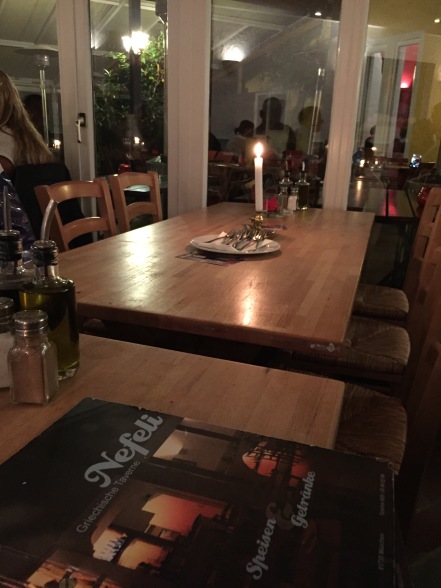 They had a table waiting for us, and they told us its the best Greek food in Munich. Even better, the owners are super nice and the food is not only delicious, but hearty in size.

We decided to share appetizers, and started off with some mussels in a tomato basil broth, peppers stuffed with cheese and a tzatziki sauce. While waiting for the starters, the owner gave us a bottle of Ouzo (pronounced oooh-zoh) which is an anise flavored liquor or aperitif, on the house. When he found out that we were visiting from “LA”, he went back and brought out another Ouzo, which was made on an island, but having a more delicate taste, which he let us have, also on the house! 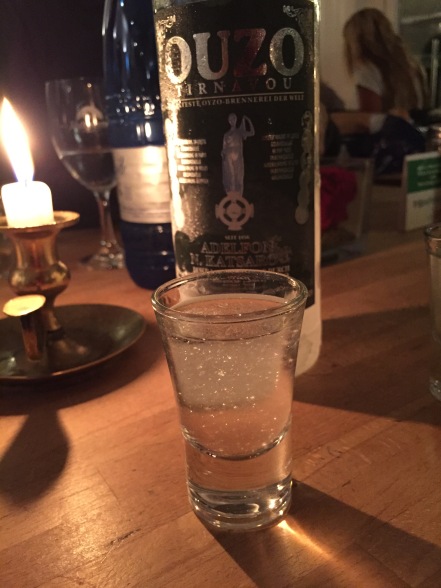 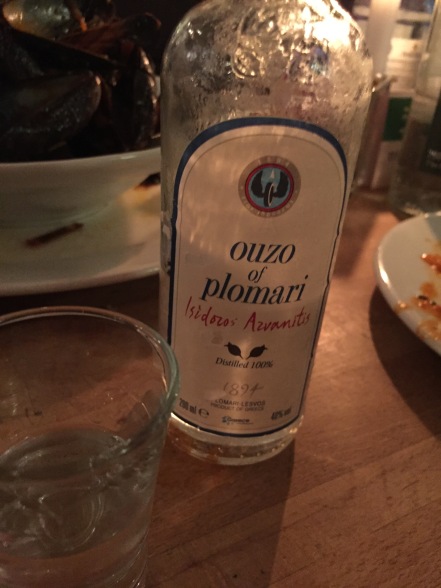 The starters were amazing! There was about a kilo of mussels, swimming in a delicious broth. We asked for 2 additional baskets of bread just to sop up the broth. I could have eaten just the mussels as my main dish. Absolutely wonderful! The stuffed peppers and tzatziki were delicious in its own right, but the mussels won me over. 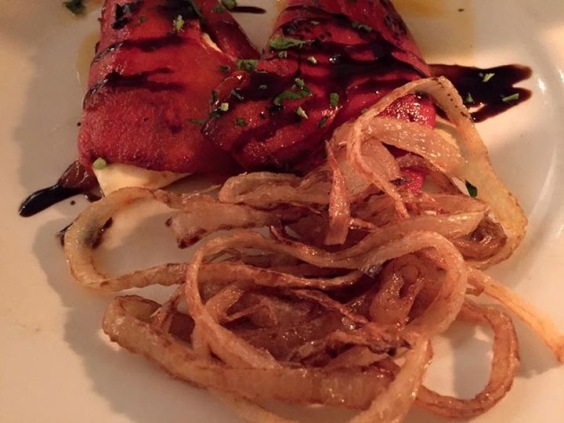 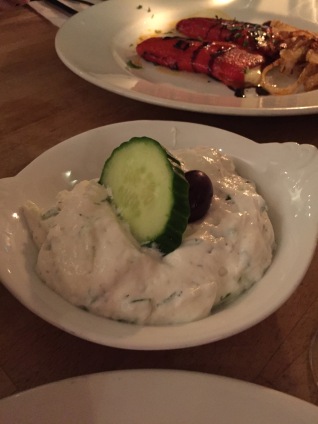 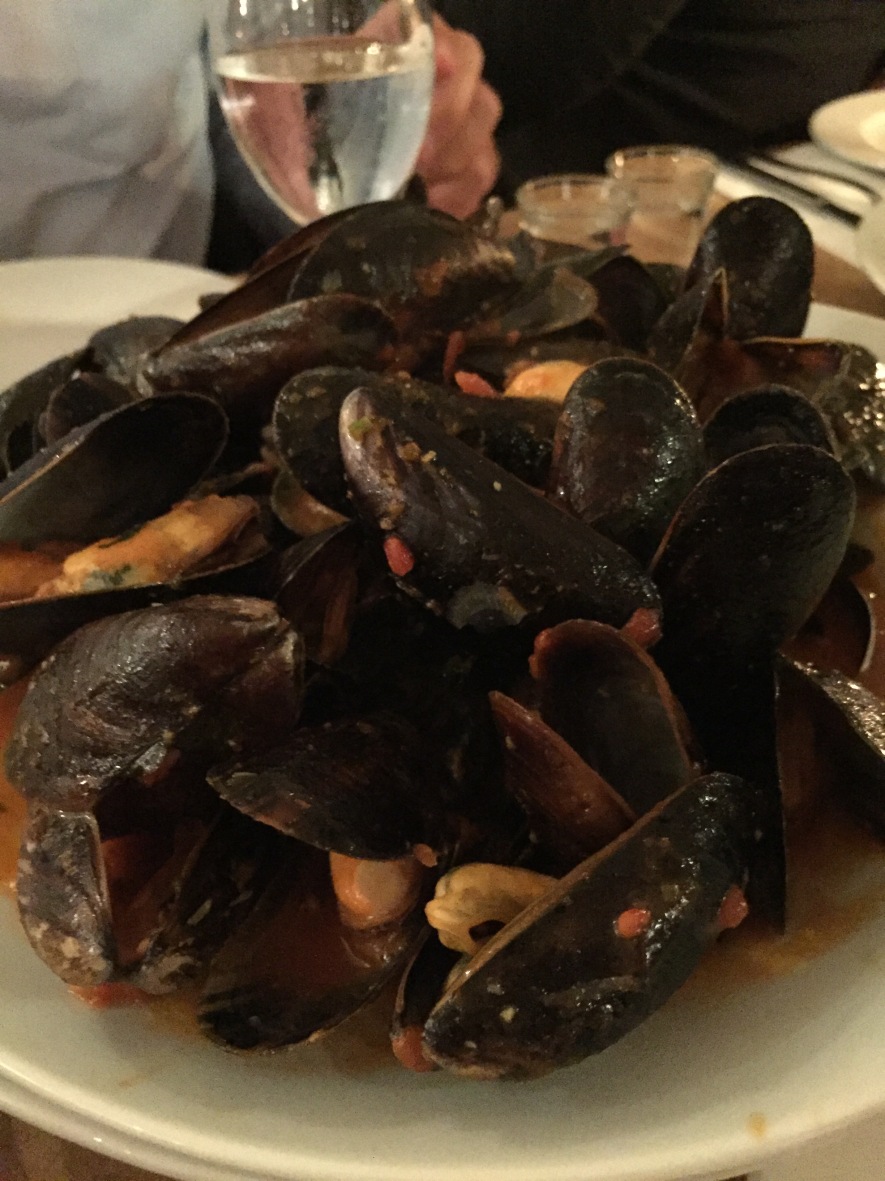 For our entrees we decided on getting our own dish, then sharing tastes with each other.

Stephen got the gyro plate with grilled calamari whileI ordered Souvlaki, which were the pork skewers served with rosemary and olive oil potato and grilled vegetables. 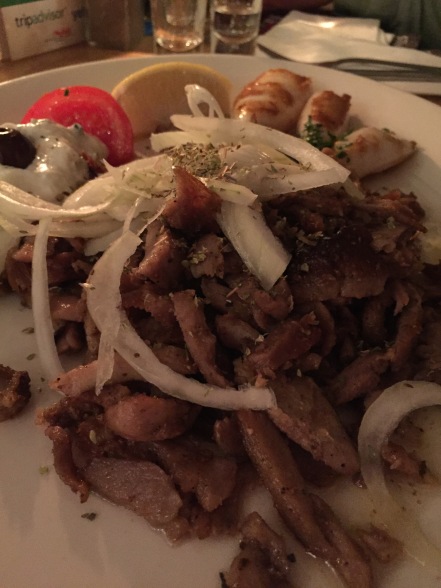 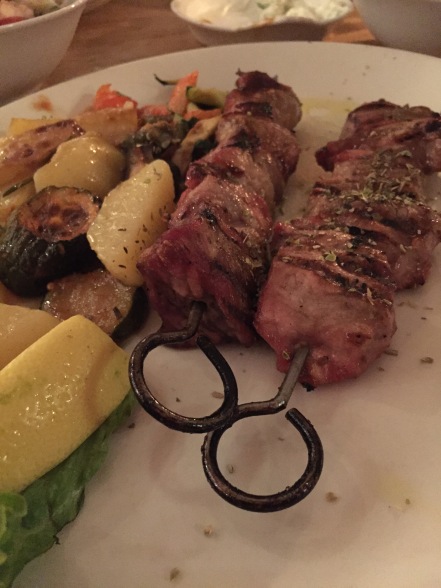 Uwe ordered the meatball that was stuffed with feta cheese, which came with Tzatziki and a house salad, while Robert went meatless and got a salad: grilled oyster mushrooms and shaved cheese over a bed of arugula. 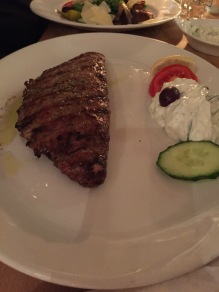 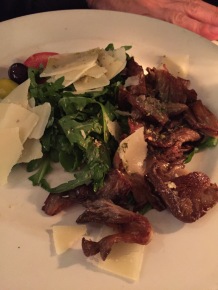 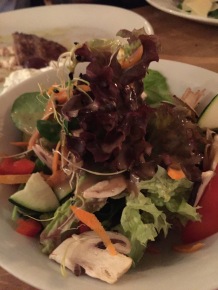 These items did not disappoint. The food was cooked perfectly and there was plenty of food to share. I had to slow down in order to clean my plate, as there’s no such thing as “doggie bags” in Europe, and I didn’t want to insult my friends by not finishing my meal. As if that wasn’t enough, the restaurant also gave us a complimentary dessert! Rolled dough in honey, served with Greek yogurt, nuts, fruit, and chocolate. Super impressive! Free ouzo and sweets? No wonder people flock back here. 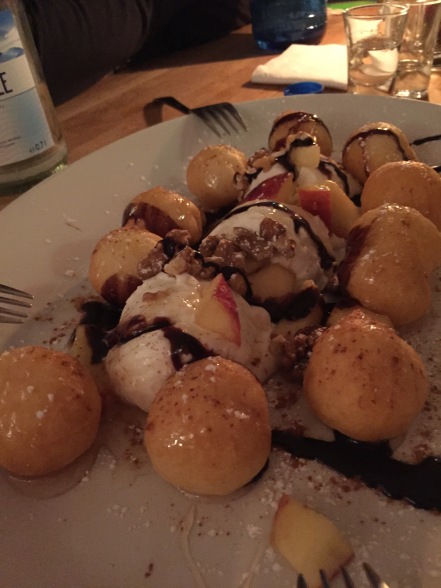 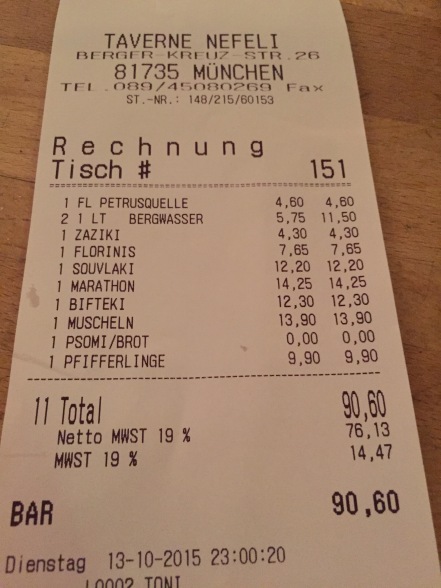 We spent over 4 hours there, and with bottled water and a service fee, the check came to €90,60. A great place that’s far removed from the tourists area. The GPS will get you there, but make reservations as its tiny inside. Outside dining available in good weather.

There are a few free parking spots in the back, but you’re better off getting a spot on the streets.