Lawry’s is a place you go for a nice evening out.  We usually frequent the Las Vegas location, and it is a quiet restaurant, very romantic, and also not that cheap.

We went to the Beverly Hills location the day before Valentine’s Day.  The place was…well, a ZOO.  People were everywhere, and there was wall to wall people.  Apparently Lawry’s hired a photographer to take “souvenir” photos and they had a table set up, literally blocking the front entrance.  I have no idea when these people took pictures, as I was there for 2 hours and never saw a photographer.

We arrived at 7:20 for our 7:30 reservations. While we waited, we found a room that had meatballs and potato chips to munch on as a snack, which was a nice touch.  For a place that will be charging $125 + per couple for dinner, there were a lot of kids on Valentine’s Day weekend, as well as a lot of people dressed like they just rolled out of bed, with shorts, flip flops, t shirts, sweat pants… what the hell?! I thought there was a dress code? Don’t say “oh, that’s LA people” because I am a Southern California native, born and raised.  Its called manners and upbringing, and some of these people don’t get that you dress up when going out to a nice place. 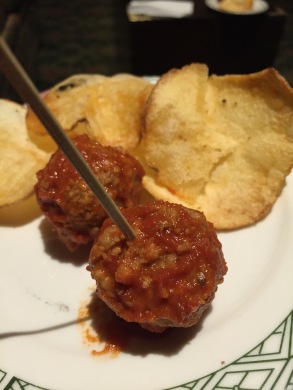 Las Vegas has a lot of booth for couples. Beverly Hills is a larger venue, catering to groups, offering a lot fewer intimate booths. The dining room is more open, but less walking space.  Many people kept bumping into each other, or had trouble passing by as the waiter, the carving trolley or people in general kept congesting the walkway.  You also get to know your neighbor intimately, as my neighbor was literally an arms length away.

The Valentine’s Dinner menu for 2 was not as attractive as I thought.
For $125 per couple you get:
– The famous salad (a given)
– A California Cut prime rib with a choice of creamed corn or spinach
– A small flute of champagne (sparkling wine)
– 4 chocolate covered strawberries to share
– Jar of the CC Brown chocolate sauce to take home.

After adding up the cost, you’re paying $31 for the champagne, berries and jar of chocolate.  No coffee? So we went off the menu and got the prime rib, the corn AND spinach (served on the side, not plated), a huge white chocolate banana bread pudding for dessert, 2 coffees and a cocktail for $119. 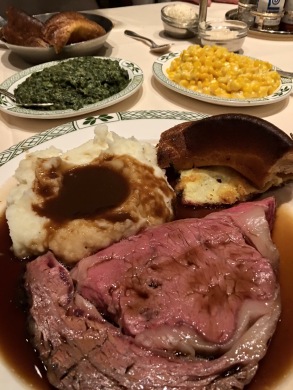 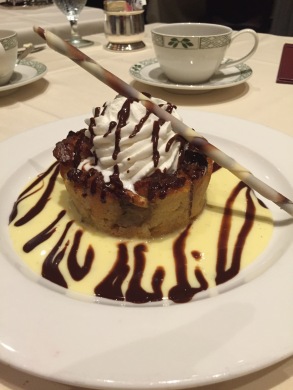 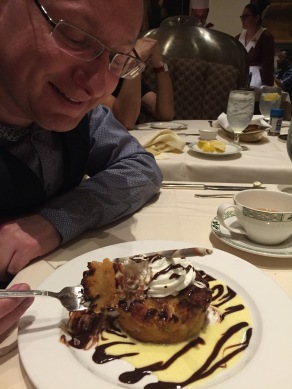 There’s more! I had 2, $25 bonus gift cards from Christmas plus 2, $25 VIP points to use.. so our Valentine’s dinner came to less than $19. I still love Lawry’s but this location is just too busy and too noisy.  I’d rather wait until I return to Vegas for Old School service, and enjoy my meal in a more romantic setting.

3-stars for this location, and not because it was the Saturday before Valentine’s Day, but because the place doesn’t enforce a dress code.