Having lunch where Walt Disney once ate

Following our visit playing tourist in Hollywood, my visiting East Coast friends wanted to have lunch “where Walt Disney ate at”… at Tam o’Shanter. He ate there? Really? Who knew!  Apparently, this local girl knows very little about SoCal compared to tourists.

I already knew it was currently owned by Lawry’s, the Prime Rib restaurant.  So, I looked it up and found that it was built in 1922, being one of the oldest restaurants in Los Angeles.  According to KCET, Walt Disney frequented this restaurant, and sat in table 31.

Walt seems to have frequented places that fit in with his fanciful aesthetic sensibilities as well as his palate. He was a regular at Tam O’Shanter, which was a stone’s throw away from his studio at 2719 Hyperion Avenue where he worked from 1925-1940. (It’s now a Gelson’s grocery store.) The legendary Scottish-themed restaurant at 2980 Los Feliz Boulevard has been open since 1922. With its thatched-roof cottage design, large collection of Scottish memorabilia, and upscale meat and potatoes fare, it was the ideal place for Walt to grab a quick bite, always at his favorite table #31, right by the big fireplace. Even after Disney Studios moved into the Valley, Walt remained a regular. 1957 found him at a party honoring the owners of Tam O’Shanter, where many of the guests wore plaids, kilts and tams.

It was a mere 15 minutes away from Hollywood and Highland  and we arrived at 2:30 pm. Unlike my last visit, where I came at dinnertime, and it was valet only, the parking lot was free and had plenty of open spaces.  The Pub and Sandwich Bar is the only section open for lunch, and the lunch menu is also smaller than the regular version.

We all chose the carved to order meat plates. I had the roast beef with mashed potatoes and creamed corn, while Sandy had the corned beef, and Jennifer had the brisket. To the side of the sandwich bar was a condiment station with horseradish, mustard, a peanut cole slaw salad, and potato salad. I took a sample of the cole slaw and potato salad, and they were delicious!  I’m sure that was meant for those who ordered the carved sandwiches, but it was simply terrific with the carved meats. 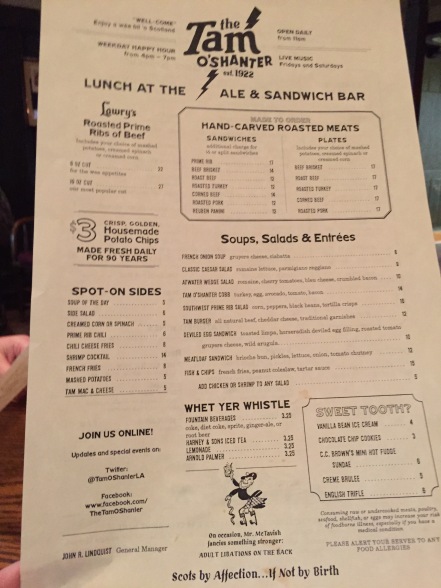 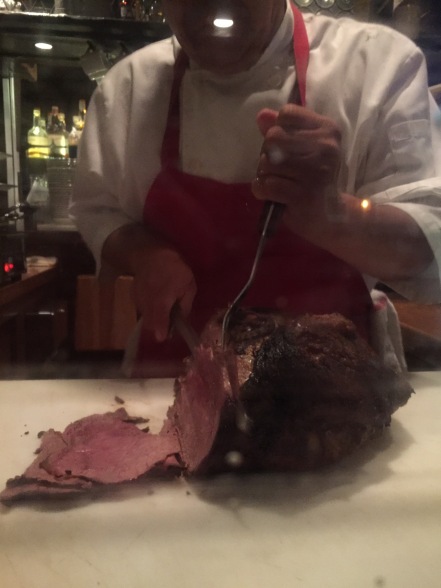 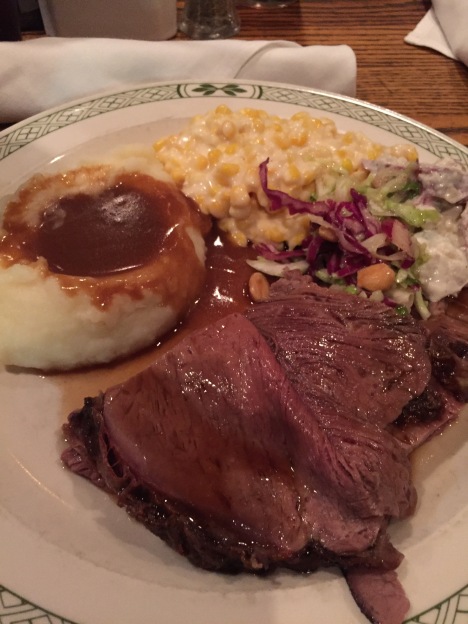 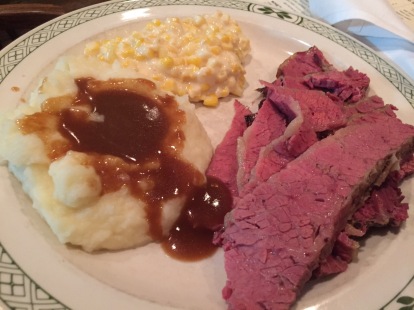 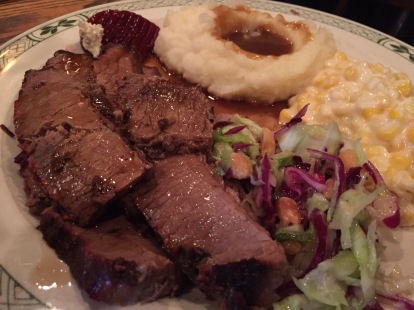 The mid week lunch atmosphere was very relaxing.  There were only a few people in the pub, so it was almost like having the place to ourselves.  The brisket was amazing, and I even took home an order to go.

Thumbs up for lunch, and its a great place to take out of town guests.