If you’re looking for gourmet hotdogs and sausages, Linx is a neighborhood gem located near the Orange traffic circle.  The menu isn’t as diverse as Wusthaus, or as whimsical as Dog Haus with their Hawaiian buns. Linx does provide a good combination of various sausages from your typical frankfurter to the german bratwurst, and craft beers with out breaking the bank.

We came here on a Sunday afternoon, not realizing that the streets were closed for a Vintage Car event. Luckily we found parking about a block away,and at 11:30 the place had a line out the door. Fortunately, people were eating their food near their vintage car, so we were able to find 2 seats facing the street. 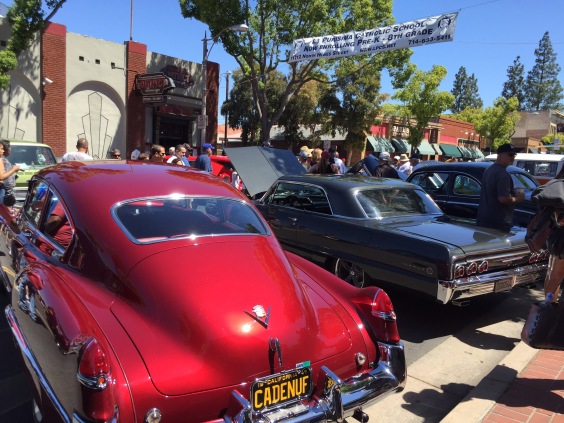 The last time I was at Linx was about 2 years ago, and there were some changes in their menu. For starters, they used to have the menu on the chalkboard by the register. No one passed back a menu in line, so when you got to the cashier, you had to peruse quickly through the menu, while people were waiting to place their order.

I ordered modified version of the double down: a fried dog with chili, bacon, pinto beans, cheese on a poppy seed bun. I guess that’s a Deluxe Linx with added chili. Stephen had the Beer Brat, which was a Nurenburg style bratwurst, with bacon saurkraut on a pretzel bun, topped with a spicy mustard.  Both were messy to eat, but oh so good! We added a large order of their fries, and had 4 dipping sauces: FriteSaus, Honey BBQ, Spicy Mustard, and Curry Ketchup. 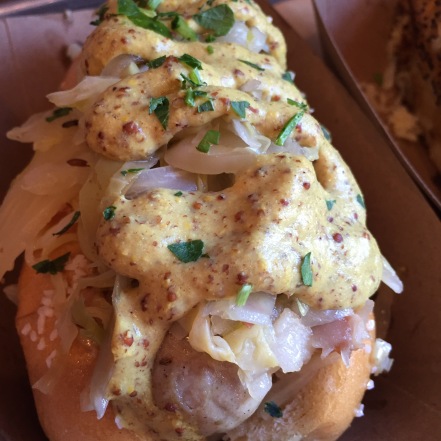 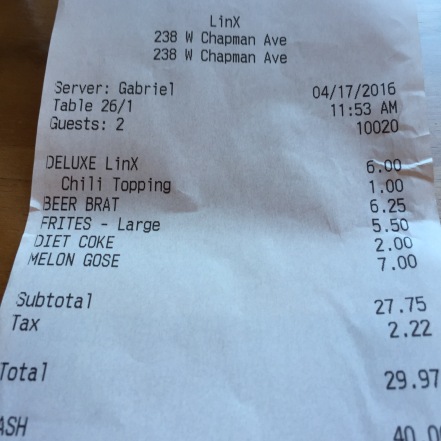 Since my last visit, they now carry Coca Cola fountain drinks, not just the independent colas in a bottle. Stephen had a Melon Gose beer, and said it went well with his brat. Overall, it was a good meal, and we left satisfied and messy fingers (which could explain why they give you a fork and knife) but worth it.