Slapfish used to be a food truck and I’ve been following this sustainable fish restaurant from day 1.. The original Slapfish is in Huntington Beach, but it was quite a trek to go down there for a bite to eat. Then, the restaurant expanded to 3 more locations but southern OC (Irvine, Newport, Laguna) which didn’t make it easier. Finally, he opened this North OC location in Brea, in the same shopping plaza as Whole Foods, and opposite side of the building to Urban Plates.

Slapfish is all about the seafood.  You can get the food fried or grilled, and average price is about $10 for an entree.  Check in on Yelp and get a free Chowder Toast.  It’s a piece of toast covered in a chowder, topped with bacon bits.  It’s about 3 bites worth, but hey, it was free. 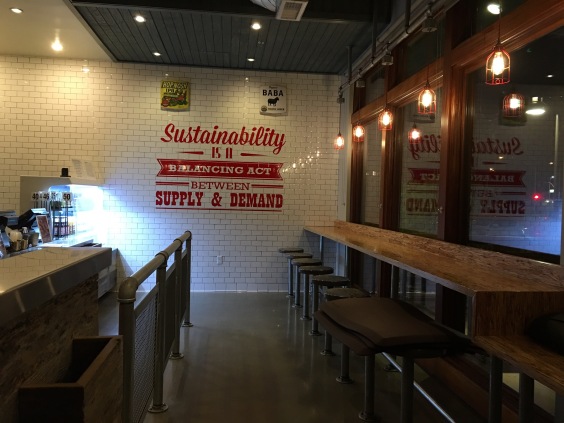 We came on a Saturday night, and didn’t know they had a Happy Hour.  Apparently, if you dine from 3:00-5:00, or from 8:00-closing, you can have free refills on the fish of the Fish and Chips for just $10.  It’s not on their website, and thankfully the employee commented they had this on our visit.

Stephen had the Happy Hour Fish n Chips for $10 (regularly 1 piece is $9, 2 pieces is $12) and I had the Grilled Fish Plate: a Hoki (they said similar to cod) with brown rice, and grilled vegetables.

Supposedly they have 4 signature sauces (Awesome Sauce, Jersey Sauce, Tartar, Fresh Salsa) but we didn’t know they had these until we re-read the menu.  Apparently you either have to “be in the know” or pay more attention to the menu and request it.  They have Habanero and hot sauces on the self serve counter, but those were not the “Signature” sauces from the menu.

The food took a while, but it came out piping hot.  The Hoki was delicious.  Moist, tender, and a decent serving.  The brown rice was bleh, and I wasn’t fond of the grilled vegetables, as it was covered in too much of the vinaigrette sauce. Perhaps I’m supposed to mix the bowl?  If so, I goofed, and did not care for it.  If I want grilled fish, I think I’ll get the “grilled” version of the Fish n Chips.

The Fish n Chips, however, was delicious!  One huge piece of whitefish and a decent serving of fries sprinkled in seasoned salt.  While the fish was cooling off, Stephen went back in line with his receipt to claim the next Happy Hour fish.  The second fish took about 10 minutes, and that refilled piece was just as large.  Stephen went for a 2nd refill and called it a night.

Overall a good experience.  There’s a lot of things you need to “be in the know” because the staff doesn’t automatically divulge the information.  I found out they have a reward program (never offered info on that) and I still have no idea what else is on the “Happy Hour” menu. This place gets 3 1/2, maybe 4 stars because of the reasonably priced food.