My cat of 20 years, Clyde, passed away about a month ago and I knew I wanted another cat. I thought I would wait until after September, when I came back from my vacation. What prompted me to look was a post by the OC Animal Care that July was free cat adoption month.  They were pretty much giving away cats for free, but you had to pay for the mandatory $17 microchip fee.  Compared to $120-150, that is practically free. 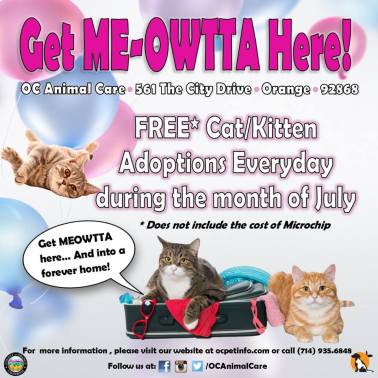 On Friday, I originally wanted a black and while female with a funny mustache.  I had already named her Charlie (after Chaplin) but when we went on Saturday, she was already adopted.  So I came across an orange tabby male, but he wasn’t available until Sunday. After playing with him for about 15-20 minutes, I knew I wanted to take him home… but how to beat the other interested people?

I arrived early on Sunday, and was there before the customer service window was even open.  I told the clerk the cat I wanted and he said “Kai” was still available.  The clerk called to have “Kai” examined, and while I waited, he started processing my paperwork.

About 20 minutes later, the clerk said “Kai” checked out just fine, and that I could have him for $17.  I asked to change his name to “Montague”. The clerk told me that they still have to neuter him, so I couldn’t get him until at least Wednesday.

I asked if I could visit him once more, and in a few days, I will have a new member in my house. Welcome to the family, Montague!