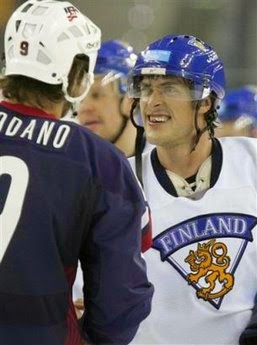 Selanne: Teeth Small Sacrifice for Gold
Thu Feb 23, 9:54 AM ET
If Finland wins the gold in men’s Olympic hockey, Teemu Selanne will have every dentist in the country volunteering to do his bridgework. Selanne lost two teeth — knocked out on a high-stick by American Derian Hatcher — and probably cracked another in Finland’s 4-3 quarterfinal victory Wednesday over the United States.Hatcher got a 4-minute, high-sticking penalty.
“Of course I’m disappointed to lose two teeth,” Selanne said, speaking through a cut lip. “But that’s an OK sacrifice for the gold. You can always get new teeth.”
That’s the Flying Finn spirit.
“It’s not easy for anybody — the jet-lag, no break, six games in nine days,” added the Anaheim Mighty Ducks’ forward, who has six goals in the tournament. “I told the guys at the start that whatever team works hardest over the next 12 days is going to win.”
The victory put Finland in the semifinals. The Finns are 6-0, have outscored opponents 23-5 and, like the quick-skating Russians, are at home on the larger international ice surface.
Finland will find out how its speed and talent measures up when it faces Russia on Friday in the semifinals.