Its our last day! Robert arranged for us to take a walking tour of the city. The last time I was in Munich (back in May 2005) it was raining. On this visit, the weather was cool, but still enjoyable, and we got to see parts of the city that a bus or car wouldn’t have access to.

The tour group met at the Marionplatz,  which is the center of town. We waited for the Glockenspiel to chime before kicking off the tour.

It goes off every day at 11 a.m. and re-enacts two stories from the 16th century. It consists of 43 bells and 32 life-sized figures. The top half of the Glockenspiel tells the story of the marriage of the local Duke Wilhelm V to Renata of Lorraine. In honor of the happy couple there is a joust with life-sized knights on horseback representing Bavaria (in white and blue) and Lothringen (in red and white). The Bavarian knight wins every time.

This is then followed by the Schäfflertanz, which is where coopers are said to have danced through the streets to “bring fresh vitality to fearful dispositions.” The coopers remained loyal to the duke, and their dance came to symbolize perseverance and loyalty to authority through difficult times. The whole show lasts somewhere between 12 and 15 minutes long depending on which tune it plays that day. At the very end of the show, a very small golden rooster at the top of the Glockenspiel chirps quietly three times. 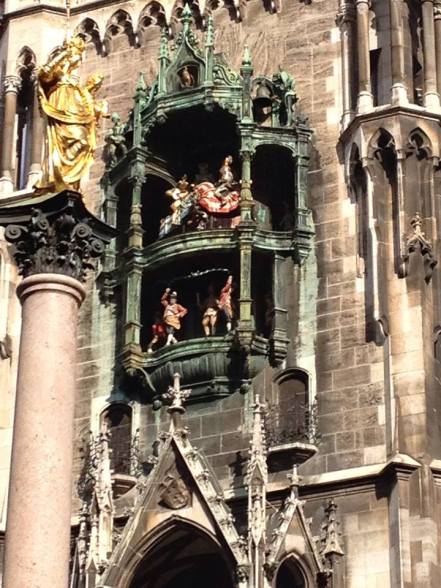 From the Glockenspiel, we made our way to one of the distinct landmarks of central Munich is the massive Frauenkirche, or Church of Our Lady.

Aside from being the second oldest parish church in Munich, and the seat of the Archdiocese of Munich and Freising, Frauenkirche is particularly famous for one very odd distinction: it bears the devil’s footprint inside its hallowed halls.

Inside the narthex of Frauenkirche is an unusual tile containing a black footprint, which is said to be the Teufelstritt, or Devil’s footprint. There are several legends of differing details surrounding the footprint, but the basic story goes like this. In 1468, architect Jorg von Halsbach made a deal with the Devil: the Devil would provide funds for the cathedral as long as it remained a celebration of darkness. No windows were allowed to be seen in the building.

Upon completion of the building, the Devil entered the church to survey the outcome. From a vantage point in the vestibule, not a single window could be seen, even though the nave was flooded with light. The Devil was satisfied with the result, but as he stepped further into the church, he realized he had been fooled. Von Halsbach had designed the nave with columns that blocked the side windows from view, and a large central alter piece covered the stained glass windows at the far end of the church. In a fit of fury, the Devil stamped his foot on the ground, leaving an imprint in the floor. He then left the church and transformed himself into a great wind spirit, which rushes around the church towers to this day

We continued walking through the streets to where Hitler gave his first speech as a Nazi before ending our tour at the English Garden, a large public park and the government building. 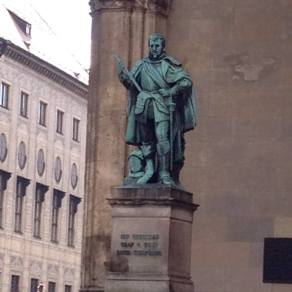 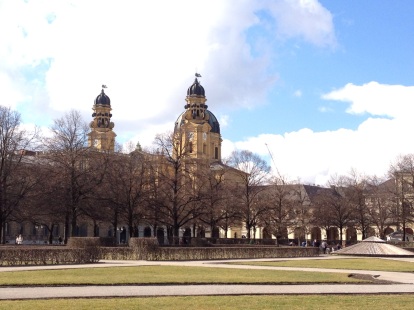 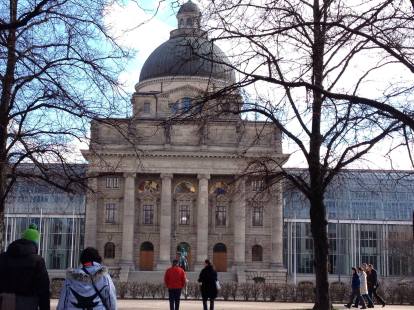 After the tour, Robert took us out for Thai food. Aside from eating at the airport,that was our last meal in Munich. I can now say I’ve had Thai food in Munich.