Hidden in a strip mall off Ball and State College, behind a “Puddles” car wash is dönerG, a Turkish / Mediterranean restaurant. We came here on a Saturday and arrived before the lunch rush.  Stephen and I both decided on the dönerG Pita Special that was posted outside, which was a chicken or beef pits sandwich, choice of fries, rice or salad, and a drink for $7.99.

Stephen chose the beef with rice, and I chose the chicken with fries.  For checking in on Yelp, we got a free baklava for dessert. The food was made to order, and was told to sit down and the food will be served to us. 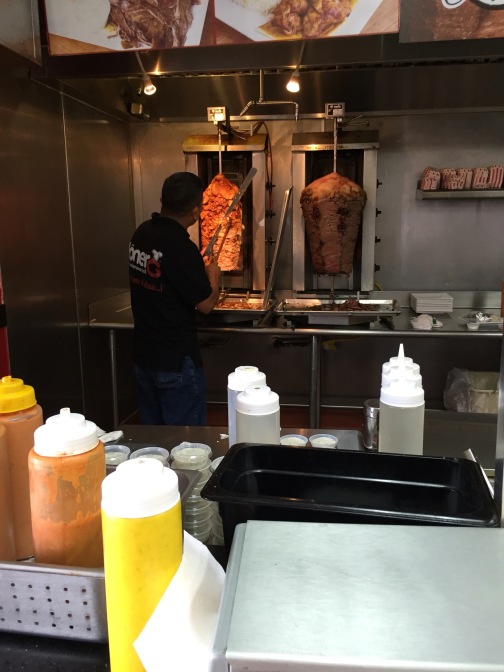 The pita sandwich was filled with meat and vegetables.  There was a reason they wrapped the sandwich in foil… eating the sandwich was messy!  I unwrapped mine too early and the contents came spilling out, and my hand was covered in the sauce.

We tried each other’s sandwiches and I liked Stephen’s beef pita more.  The chicken wasn’t as flavorful compared to his, but I liked my fries more than his rice.Both had the same orange sauce, which had a slight kick to it, but not overwhelmingly spicy.

For dessert, Stephen inhaled the baklava.  It was flaky, sweet and just the right size to complete his meal. An overall good meal, and a super affordable price. 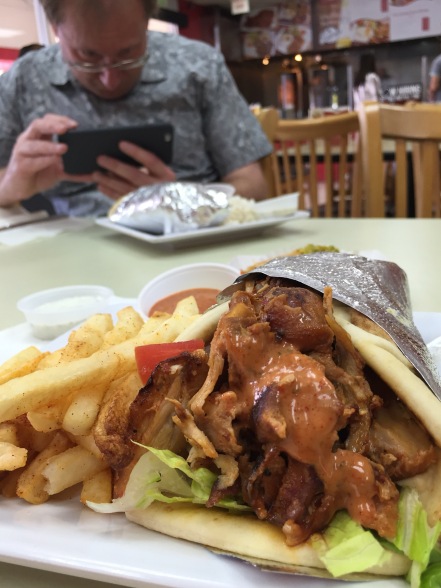