On March 19, the Ontario Reigns (the LA Kings affiliate) was hosting the San Diego Gulls (the Ducks affiliate) at the Citizens Bank Arena in Ontario, CA.  We decided to check out this minor league cross state rivalry, and they did not disappoint.

The arena is located off the 10 freeway, and the arena is a few blocks away from the Ontario Mills mall. Parking is only $5 and the arena is state of the art. The arena has one concourse level, and prices are much more affordable than the NHL level.  Lower level seats on the blue line was $45.00.

Every seat in the arena was a good seat, even at the end zone behind the goal.  Concession-wise, there’s not a lot of choices: hot dogs, burgers, prezels, a Mexican food stand, and of course, beer.  While walking the concourse, I came across the Chuck a Puck table, and purchased 6 pucks.

The game was fast, and the home team crowed enjoyed taunting the opponent and their fans.  At the end, the Gulls beat the Reigns 4-1, and after the game, they had the Chuck a Puck on the ice.  I did notice their arena is much colder than the Honda Center, and wished that I wore a thicker hoody.  Next time I am bringing a blanket! 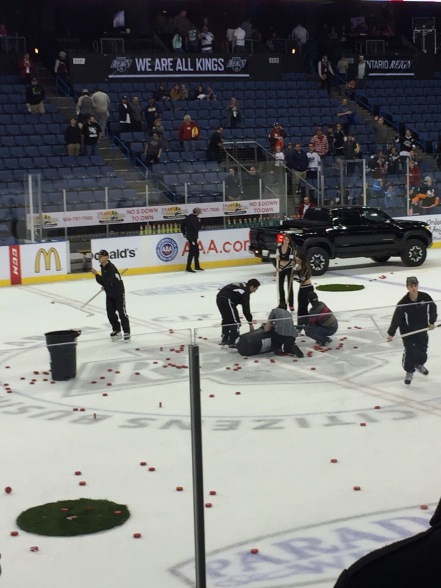 Overall a fun event, and a great way to spend a Saturday night with friends.