It’s your typical mom and pop coffee shop with grandma’s wood tables, condiments already on the table, and a huge breakfast selection with huge portions to match it. It is located in the back of a dilapidated strip mall, next to a Dollar Tree, and behind a Starbucks on the corner, with a yellow sign that says “Greatest Breakfast in Town”.

We came in on a Saturday around 10:30 am, and there were 3 parties ahead of us. We wrote our name down, and the waiting area is configured in such a way, you can’t really tell how busy it is on the other side of the wall. The dining room is divided into 2 sections, and we were seated in the area by the kitchen.

We were immediately offered coffee, which were served in whatever mug they picked up at Big Lots or probably even Dollar Tree. Stephen had a mug with Santa, while I had a Venice souvenir looking mug. Coffee wasn’t the best. I think they said it was Yuban. It’s definitely not a strong coffee, but it did have some flavor to it. Pretty much, it’s coffee you expect from a well, coffee shop. 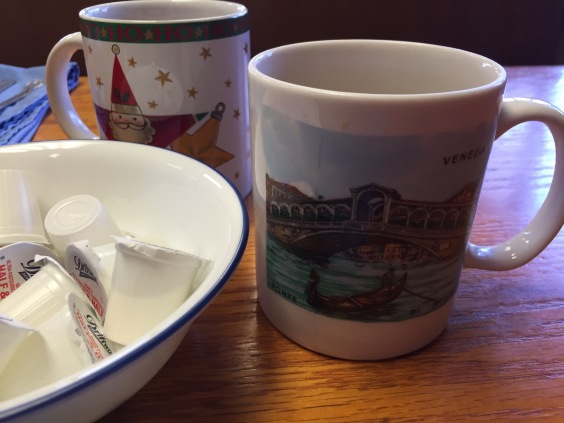 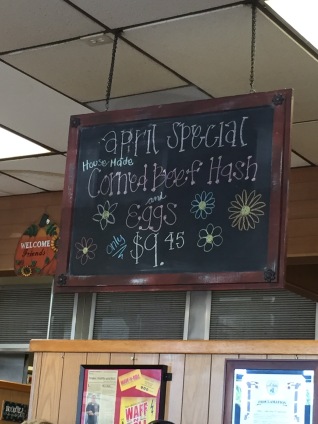 The “Special of the Month” was their housemade Corned Beef Hash, for $9.45, which normally was $12.95. Included with the hash was 3 eggs, choice of potatoes and choice of bread. We chose their O’Brien potatoes which supposedly had bell peppers and onions… we just got onions. We chose their “famous” biscuits as our bread, and added a side of Bacon gravy for $1.75 more.

The staff was kind enough to split our plate for us, and I’m thankful they did. The food was just ok, but there was plenty of food for 2 of us. We left satisfied, thankfully not in a food coma.

Was it the “best” breakfast we had? Nope.. but the service was friendly, they were accommodating, and they let us split their food without a fuss. For me, that’s better than A-OK and I’d come back again.