Last weekend for Festival of Holidays

With the holidays over, it’s time for Disney California Adventure to close down their Festival of Holidays event.  Stephen and I had some tabs left on our “sip and savor” pass, and went on Saturday, January 6 to use them before meeting up with Shellie at the Cove Bar, which was also closing after that weekend to be rebranded.

Our first food stop was at Grandma’s Recipes, where we picked up Grilled Chicken Sausage with Red Beans and Rice  and the Beef Brisket with Brown Sugar-glazed Carrots. Stephen liked both but thought the carrots were very undercooked.

The kiosk next door, Festive Holiday Extras, had Brussels Sprouts with Goat Cheese, Cranberries and Bacon and Baked Cheesy Scalloped Potatoes.  Both of those were excellent, and generous in portion size. 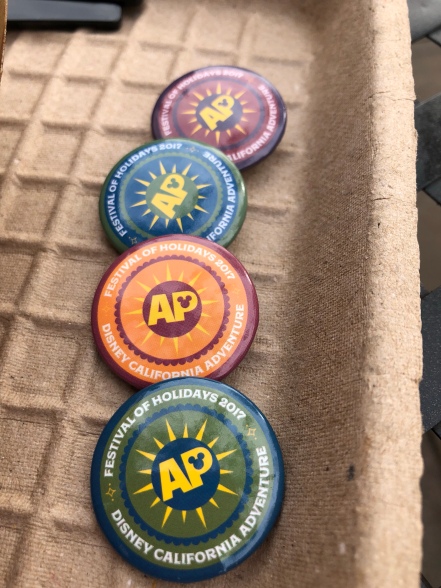 With our bellies a bit fuller, we met up with Shellie to stand in line at the Cove Bar (which took about an hour and a half) to have drinks and their famous lobster nachos.  While I held our place in line, Stephen and Shellie went to the Spicy Celebrations kiosk for Nashville Hot Fried Turkey with Dill Pickles.  They must have toned down the heat, because it was not as spicy as others claimed it to be.

After the Cove Bar, we still had tabs to use, so we went to the Winter Sliderland for Holiday Ham Slider with Pineapple Relish and Roasted Turkey Slider with Cranberry Sauce, and finished it off with Mike Chocolate-Candy Cane Pot de Crème, and took home Cranberry Pear Tart with Rosemary-infused Cream and a White Chocolate-dipped Lingonberry Speculoos Cookie (not shown)