I had friends visiting from out of town, so I got to play tourist in my own backyard. Born and raised in Southern California, I’ve always wanted to see what these cheesy Hollywood bus tours were all about. Thanks to a deal on Groupon, I was about to play tourist.

So the deal on Groupon for Hollywood Tour LA was $19. Thankfully, did not pay full price of $49, and the Groupon was not including the three dollar service fee (per ticket) when you finalized booking the tour online. I found out that the Hollywood tours share passengers with multiple tour companies, in order to fill up their tour buses accordingly. To be clear on which company one we used to book, here is the website https://www.hollywoodtourla.com.

LOCATION:
The cross street is Hollywood Blvd and MaCadden Place. The storefront is on McCadden literally behind the Starbucks that is on the corner of MaCadden and Hollywood Blvd. The parking that’s mentioned in the Groupon are metered parking on the street, but our tour went past 2 hours so I suggest find an actual parking lot to park.

They asked us to arrive 1/2 hour early for our 10:30 tour. We were too early, so we killed time at the Starbucks. Drinks are permitted on the bus, however there’s no cup holders.

THE TOUR:
The tour did not start quite on time, as the manager didn’t know where to place my group of 3, and another couple. I also found out that its a gamble on what type of bus you can get… You can get either on a really good tour bus, or you can get a piece of sh!t bus where the seats are dirty and torn. 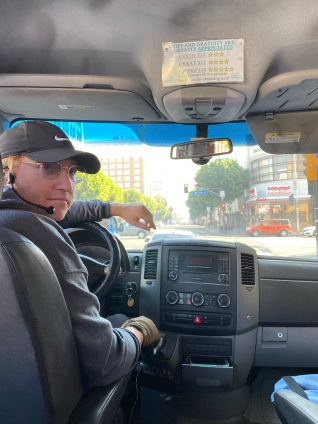 At first he was going to have us walk half a block and across the street to catch a dumpy looking van. We were very lucky because my friend was disabled, and so was another passenger. We didn’t want to walk all over Hollywood Boulevard to get shoved into a half filled dirty looking bus, so we told the manager we were not having 2 disabled women walk that far. The manager had our driver Tommy bring us a decent, covered bus. While it is covered, there were no windows on the bus… but you are covered from the sun, not necessarily protected from the wind.

About a half hour into our tour, our driver turns back towards Hollywood Boulevard and picks up two more people. I felt bad because the two newcomers missed out on first part of the sightseeing in the Hollywood hills and probably paid full price.

Tommy took us all over the Hollywood hills, Melrose, Sunset, and even over to Rodeo Drive/ West Hollywood. He pointed out various Studios, landmarks and pointed out some homes that may (or may not have been) owned by celebrities. 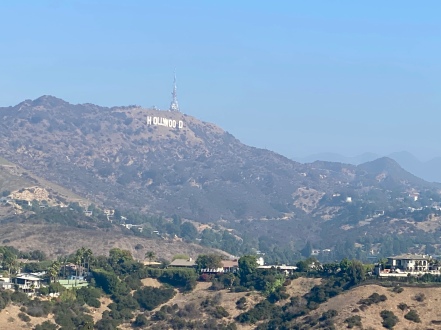 He would pull over the van for photos, but there wasn’t really any time to get out of the vehicle, nor were many spots considered safe to get out. If you’re looking to get that perfect photo opportunity, this tour is not it. If you want to gawk at potential celebrity homes for 15 seconds, this is the tour.

HIGHLIGHT OF THE TOUR:
The one unexpected and definitely unplanned hightlight that made my day was when we were leaving Rodeo, heading toward WeHo, a black SUV pulled up next to us on Santa Monica Blvd. The window rolled down, and the man offered us his burrito…and that was Gene Simmons from the rock band KISS!! Our driver was even floored that Gene chatted with us while parked at the red light.

OVERALL THOUGHT:
Our tour ended closer to 1:00, so over 2 hours. Was this worth full price? Nope. Is it worth a Groupon? Yes but don’t pay more than $19! At the end of the day I did tip our driver 10 bucks, only because we got an actual celebrity sighting.