It’s another Taco Tuesday! Tucked away in a strip mall, across the parking lot from Popeyes, and Fresh Choice market is La Cotijas Grill. Their tacos on Tuesdays are just under 2 bucks at $1.99, and you can get any taco except the shrimp and fish tacos. Beers are $2.99.

I decided to try their carnitas (pork) and carne asada (steak) tacos, while Karen went with their 2 chicken enchiladas for $4.99. With 2 sodas, the price came to $13 and change… which I thought was a bit pricey for a Taco Tuesday deal.  The food came out quickly and the Tacos were better than I imagined. They’re not the usual cilantro, onions and salsa on top but for the carnitas, they added frijoles and salsa on top, and for the asada, topped it with guacamole.  You can add other condiments at the salsa bar, located near the soda machines. 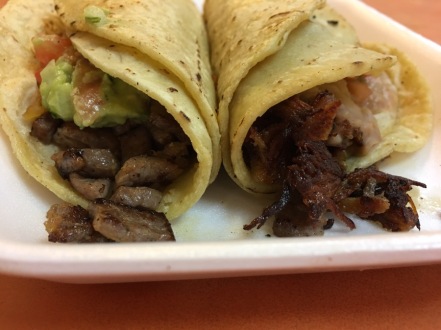 The 2 tacos were quite filing and not bad for $2. The carnitas was a bit dry and crunchy, which I didn’t care for. The asada was cooked nicely, and flavorful. Between the 2, I’ll pass on the carnitas next time, and maybe try the chicken or the pastor. 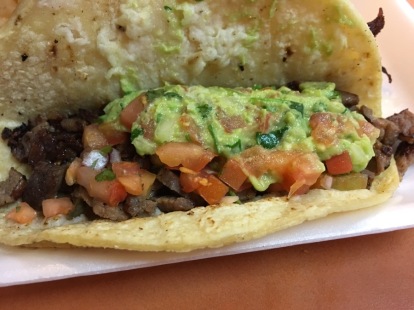 Karen liked her enchilada, and was surprised they put bell peppers and onions inside, rather than just the chicken and cheese. The chicken was shredded chicken, and while the red sauce was truly a dark,  red sauce, it wasn’t spicy at all. On a 5 point scale, I’ll give this place 4 stars —  but definitely not a 5. Plenty of parking and decent amount of tables. It did get busy after 7 pm, but looks like mostly take out people.